Everything falls under a
Creative Commons

Death in the dark

Death in the dark: stories from the smuggling routes out of Syria 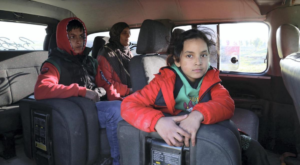 Haleema with her son Mohammed, 15, and daughter Basema, 11, leave for the Syria-Turkey border from Harem in Syria’s Idlib province. Photo by Abdul Azez Ketaz

In the pitch-black night, they walked through the hills separating Syria and Turkey, talking in hushed voices as they followed a smuggler.

“We were not allowed to light a cigarette for fear of being seen by police,” Abu Khalid, who tried to cross into Turkey with his wife Nesreen and three children, told The National.

“The children and families whispered among themselves in low voices. The smugglers gave orders to be quiet.”

In the darkness, someone opened fire. His son Khalid, 16, was killed.

“It was on that exhausting day, walking slowly, hiding between the hills and the trees, we climbed one hill and descended another,” Nsreen said.

“When we arrived at the closest point to the border we heard sudden shouting and after that, gunfire.”

Crying, she recalled the smuggler shouting for everyone to retreat. She said she grabbed two of her children by the hand but Abu Khalid couldn’t find their eldest son.

In the shouting, shooting and darkness, he had become separated from the group.

The soldiers rounded them up and took them to a holding cell at a nearby border point.

The next day they released them back into Syria. Even then, Nesreen said she thought Khalid might have got through.

“I didn’t know what had happened to him until we reached Syria the following day,” she said.

“My husband thought Khalid had fled with the smuggler and reached Turkey, but instead he revealed the tragedy.

“This cost me my son. Khalid had survived bombardment and blockades since 2011 and he died on the border, bleeding, not knowing who had killed him.”

The family first fled the regime offensive in Eastern Ghouta near Damascus in March 2018.

After trying to find somewhere safe, they decided their only option was to flee to Turkey. The only problem was that the border remained closed to refugees.

The Syrian Human Rights Network recorded 411 deaths like Khalid’s as of December 2018.

“Soon after we left Ghouta, I wished we had never left or we had died there instead of leaving,” Nesreen said.

In recent weeks, Russian and regime aircraft have been carrying out a relentless bombing campaign of the last rebel-held areas, that covers Idlib, parts of rural northern Aleppo and along the Turkish border. 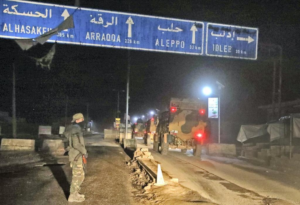 Tens of thousands have been displaced and under the bombardment, the number seeking to escape the offensive by fleeing into Turkey has increased.

Many are lured by smugglers who promise an easy, almost guaranteed crossing.

Tawfiq said he had worked as a smuggler on the border for years. He operates from the Idlib border town of Haram.

Things were not complicated in the beginning, Tawfiq said. It was easy to find a good smuggler and there were different prices for every budget. But those days are long gone.

Tawfiq said most of his colleagues openly lied to people about the risks of the journey, which he said was almost certain to fail.

While he has been sneaking over the boundary for years, he said many of those who set themselves up had with no experience.

So many people have tried and failed to make the difficult crossing that whole villages along the northern Syrian border, which are populated with people preparing for another attempt.

Tawfiq said some had tried 10 times or more but were turned back.

“‘This route is for smuggling and isn’t a legitimate crossing point.’ This is what I say to the people that come with me,” he said.

“It could take several hours of difficult routes, rivers and mountains, nothing more or less. We might enter or might not, and if we get caught we will try again until we get in. This is what is ahead of us.”

Tawfiq said he had a few tricks to avoid the Turkish army patrols. He divides people into several groups of about 30 people each.

They take a different path so that if some are caught, others might still cross. Those stopped will try again after a few days.

Sara Kayyali, a Syrian researcher for Human Rights Watch, says that through the years of war, civilians have been exposed to human traffickers who have exploited their need to cross front lines and borders.

This exposes them to great dangers that cost many of them their lives.

When the 2011 crackdown on the mass protests against the government of Bashar Al Assad turned into civil war, hundreds and then thousands began to flee to neighbouring countries.

More than a million were registered in Lebanon by 2015 when the government in Beirut ordered the UN refugee agencies to stop new arrivals.

About 3.6 million Syrians are registered today as refugees in Turkey and more than 600,000 in Jordan. Over a million fled to Europe.

With countries already hosting thousands, many have closed their borders to new arrivals. But this has not stopped people trying.

“The countries that border Syria should open those borders for civilians fleeing to safer regions, and not leave them at the border to become victims of the smugglers’ and human traffickers’ greed,” Ms Kayyali said.

Many of the armed groups operating in the north of Syria make good money offering their services to cross. Some buy old passports or use expired travel documents.

But Ahmad Birad, the former head of Bab Al Hawa crossing point in Syria, said Turkish authorities increased their focus on people trying to get into Turkey and he did not believe it was possible any longer to use fake papers.

“There are many checks and procedures on both sides, especially those crossing from Syria to Turkey, including fingerprints, photos and checking the validity of documents such as visas or crossing permits,” Mr Birad told The National.

The former border official said authorities were targeting those smuggling people into Turkey.

“There are many currently under investigation, accused of falsifying official documents and human trafficking and fraud, who face huge fines for crossing the border to Turkey illegally,” Mr Birad said. 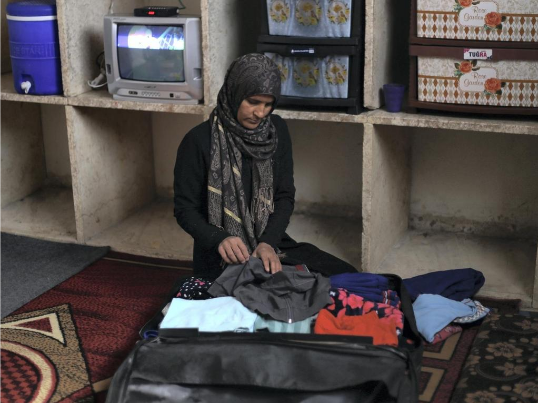 Haleema packs for her family’s attempt to cross into Turkey at their home in Maaret Al Numan, in Syria’s Idlib province. Photo by Abdul Azez Ketaz

But the difficulty hasn’t stopped people. Haleema, a mother of three, decided to flee after shelling of their east Aleppo neighbourhood killed her husband and her daughter had to have her foot amputated.

Haleema made a deal with a smuggler to get her to Turkey after she was unable to get permission from officials at the Bab Al Hawa crossing to let her take her daughter Basema, 11, to be fitted for a prosthetic foot.

“We packed our bags and set off,” she said. “The smuggler assured us that the journey would not be too long and that we would complete the journey in a car after the first hour of walking.”

Haleema’s son Mohammed, 15, helped Basema on the walk, while her oldest daughter Razan carried the luggage.

They walked with about 100 people under the cover of darkness along slippery, muddy ground – exactly the opposite of what the smuggler had said.

“Unfortunately our journey did not end in Turkey,” Haleema said. “The Turkish border guards arrested us and beat all the men to identify the smuggler who had led the convoy, but they were not able to give an answer.”

They were detained and then released again to Syria across the Al Yamdya border crossing.

“I returned to the starting point, going back to my destroyed house that is unfit to live in, surrounded by shelling, destruction and death,” Haleema said.

“We don’t know what will become of the region and what is to come of us.”

This report was written as part of the Syria in Depth project, in partnership with IMS, the Guardian Foundation, the Syrian Female Journalists Network (SJFN) and Syria Untold